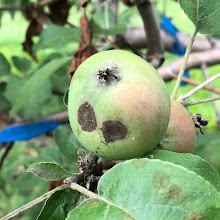 Weather data source, the location of a station, and DSS each make a difference in numbers of fungicide applications to control primary apple scab. So why the difference? Is the weather data different? Probably. Are the models interpreting the data differently? Probably. So it’s a combination of both? Likely.

INTRODUCTION
In the Northeast it is not possible to produce apples commercially without timely fungicide sprays to control apple scab. Decision Support System (DSS) models based on weather data allow more targeted and potentially better scab control with fewer fungicide applications than a calendar spray schedule during the primary phase of apple scab infection. But does the source of weather data input or the DSS make a difference in predicting infection periods? To answer that question, we compared weather data collected in 2020 from several weather stations and a virtual weather data source at the UMass Orchard in Belchertown, MA.

METHODS
Weather data was collected from four on-site weather stations at the UMass Orchard in Belchertown, MA. Two stations are situated close to one another, and the other two farther apart, as shown in Table 1. Weather stations included two RX3000 and one U30 weather station from Onset Computer Corporation (onsetcomp.com), and one Rainwise (rainwise.com) weather station. All collect temperature, wetness, and precipitation data, requisites to run the primary apple scab infection model on the Network for Environment and Weather Applications (NEWA). The NEWA apple scab model is based on Mills Table infection events with modification. We also looked at one “virtual” weather data service (meteoblue.com) feeding weather data into RIMpro (rimpro.eu), a cloud-based DSS running its own (proprietary) version of the apple scab infection model. RIMpro was also run using data from the Rainwise weather station.

DISCUSSION
Primary apple scab infection periods ranged from three infection events for RIMpro up to ten infections for NEWA (Table 2). Spray events followed similarly, ranging from three fungicide sprays to twelve sprays. Thus, the number of infection periods and proposed fungicide sprays vary significantly, from three to ten and three to twelve respectively. There are several sources of variability that could result in such different DSS outputs, including: virtual vs. hardware weather station (including manufacturer), location in the orchard, and different DSS interpretations of the scab model, particularly NEWA vs. RIMpro. Several assumption, particularly when it comes to spray events, have been made too, which could be argued. But these differences are concerning and could result in a grower taking different actions, and experiencing different outcomes, like getting scab, depending on how weather data is collected and what DSS is used. Therefore, there is a need for further field testing using fungicide applications applied according to each Decision Support System.
For further reading:
Clements, J., and D. Cooley. 2013. A Comparison of Two Sources of Environmental Data and Three Model Outputs for Primary Apple Scab in 2012 at the UMass Cold Spring Orchard. Fruit Notes, Volume 78, Spring 2013. http://umassfruitnotes.com/v78n2/a2.pdf
Garofalo, E., A. Tuttle, J. Clements, and D. Cooley. 2016. Discrepancies Between Direct Observations of Apple Scab Ascopore Maturation and Disease Model Forecasts in the 2014 and 2015 Growing Seasons. Fruit Notes, Volume 81, Spring, 2016. http://umassfruitnotes.com/v81n2/a2.pdf
Weather data in, DSS out for apple scab infection period model -- does it make a difference? (YouTube video.) A comparison of four on-site weather stations and one virtual weather service as data sources in 2020 for the apple scab infection period model in two Decision Support Systems at the UMass Orchard in Belchertown, MA. A presentation at the 62nd Annual New England, New York, and Canada Pest Management Conference for Extension, research, and consultants, October 19, 2020 via Zoom. ©2020 Jon Clements and the UMass Fruit Advisor, umassfruit.com. Or play here...

Posted by Jon Clements at 2:32 PM No comments:

Comparing the Malusim app to the ‘Schwallier’ and ‘Ferri’ XLS spreadsheet versions of the fruitlet growth rate model in 2020 to predict fruit set in Gala, Honeycrisp, and Pazazz® apples

Five tall-spindle apple trees in each of three varieties – Gala, Honeycrisp, and Pazazz® –  were selected at the UMass Orchard in Belchertown, MA. In May 2020, bloom (total number of flower clusters) in each of the five trees was counted to get an estimate of potential fruit set, and fourteen flower/fruit clusters were selected and tagged for fruitlet growth measurements. Fruitlet measurements were started on 27-May, and then made on 31-May, 4-June, and 12-June. Fruitlet measurements were entered using the Malusim app smartphone (iPhone) voice recognition feature and results calculated in Malusim (malusim.org) to get predicted fruit set. From Malusim the same data was exported and used in the Schwallier and Ferri XLS spreadsheets/apps to get predicted fruit set. The Ferri XLS spreadsheet is a modification of the Schwallier sheet by Tom and Joe Ferri, T&K Orchard, Clarksburg, Ontario, Canada and not publicly available, but available on request. The fruitlet growth rate model output included percent fruit predicted to set and fruit numbers per tree on each measurement date so that the need for a chemical thinning spray could be better assessed.

For each variety, all three predictions of fruit set were similar within variety. Therefore, any of the three “apps” could be used to predict fruit set. In the end, however, final fruit set, as counted by the number of apples left on each tree, was less than predicted by the apps except for Pazazz®. And actual fruit number per tree counted at harvest was less than the target number of fruit per tree. (Ugh.) A severe carbohydrate deficit at the time of chemical thinner application – as indicated by the Carbohydrate Balance in Malusim – is the likely culprit.

Although the fruitlet growth rate model is a useful tool to help guide thinning decisions, setting it up and measuring fruits is an onerous process and has not been widely adopted by growers. What’s needed is a faster and simpler method of assessing fruit growth rate during the chemical thinning window. To that end we are investigating, and in collaboration with Carnegie Mellon University, computer imaging and learning to visualize and calculate fruit growth rate. Early results are promising.

Posted by Jon Clements at 10:38 AM No comments: