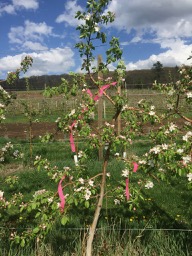 OK, I have been through this before, the whole measuring apple fruitlets thing and entering data into the precision thinning spreadsheet to determine if I needed to do more chemical thinning (or not) routine, you can read all about it here: http://jmcextman.blogspot.com/2016/06/precision-chemical-apple-thinning-in-ma.html But in 2017 I decided to ease the workload AND at the same time do more varieties. Yea, right.

To that end, I used four groups of dwarf apple trees -- Honeycrisp, Gala, Fuji and DS-41 (Pazazz) -- at the UMass Orchard in Belchertown, MA. These trees were either on M.9 or B.9 rootstock, and six to ten years in age, in other words pretty much settled down tall-spindle type trees planted three feet apart. The Gala/M.9 were tallest (at the top wire), the 10-year old Honeycrisp/B.9 the shortest (barely 7 feet).

Instead of doing the recommended 15 spurs per 5 trees, for 75 spurs total, I said to myself "surely 5 spurs per tree, 5 trees, 25 spurs total will be enough in these trees and give me a good enough idea of what's going on and save me a lot of work, right?" Yea, right.

*I think, can't really verify with spray operator, but it was something like petal fall carbaryl, followed by a carbaryl/Fruitone spray at modest rates, let's just say it was pretty much a "grower standard" for 2017. Pretty lame, huh? 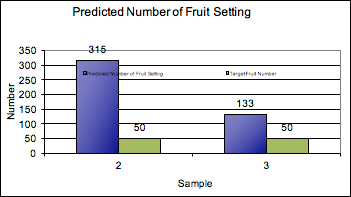 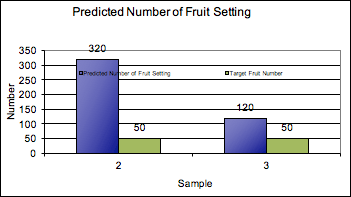 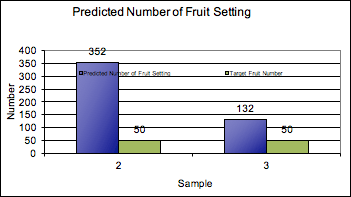 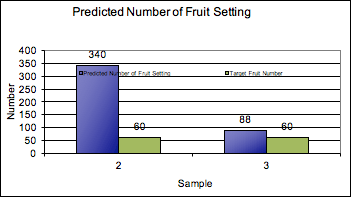 Some explanation on what you are seeing in the Figures:
Now that you got it, well it sure looked to me like we were getting some pretty good thinning across the board with the second chemical thinning spray that was made between measurement 2 and 3. So, as already mentioned, enough was enough, right? Yea right.

I could tell by mid-summer that most of the trees were clearly overset. But I left them to harvest, and then picked and counted all the fruit off each of the five trees. Here is the average number of fruit left per tree (across the 5 trees) by variety compared to the target number of fruit and what the spreadsheet was telling me after the last measurement (see Figs. 1-4 above).

Except for DS-41, all the trees had more fruit on them at harvest than what was predicted on the last measurement date and all had way more fruit than the target number. (I knew that about mid-July!)

One other data observation before I get into what went wrong. I counted the number of fruit left at harvest on each of the 5 tagged spurs. (Except for Honeycrisp, it dawned on me this would be a good idea after I had already picked the fruit. D'oh!) The results are kind of interesting, because, think about it -- if five flowers, 25 fruit set potential, 10% (the already defined target) then there should only be 2.5 fruit left per 5 flower/fruit spurs counted. Or 12.5 fruit per 25 clusters counted (125 fruit potential). My results on the 5 trees (25 clusters) are: Gala, 21 fruits left; Fuji, 16 fruits left; DS-41 (Pazazz), 11 fruits left. Remember, there should only be 12.5 fruits left. This somewhat mirrors the results above, in that DS-41 actually had the best thinning compared to the others. I could say more about this, but suffice it to say the flower clusters I tagged and picked to measure fruits were pretty representative of the end result.

OK, so what went wrong here? I have several (five to be exact) observations:
Speaking of shortcuts, I would like to point out that I procured an inexpensive ($80) Bluetooth caliper on Amazon and paired it up with a custom spreadsheet I developed on my iPhone to enter data automatically in the field (Fig. 5). 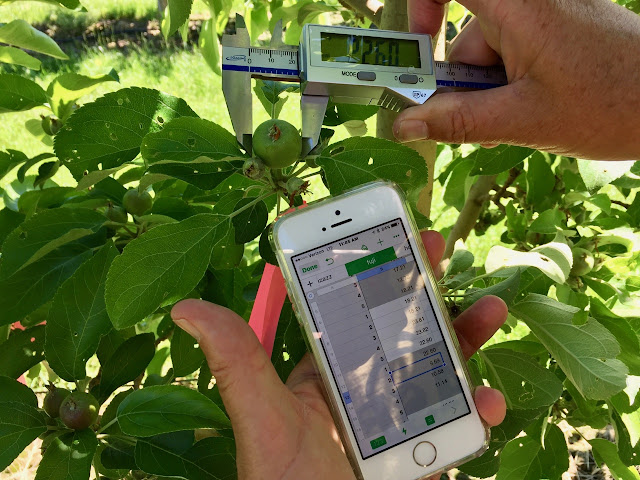 It worked OK, just OK. I had to keep an eye on it to make sure it recorded data properly. If just one observation was skipped, then all the entries from thereon would be off, which would not be good. It has to be drop-dead reliable/accurate to be really useful. Needs work. Speaking of which, with all the talk about machine learning now, why not an app that can snap picts of fruit clusters and analyze which fruitlets are growing (or not)? I don't think that is too far-fetched?

Where do I/we go from here? As I've said before, it is a useful exercise to get out and measure fruitlet growth to help assess what is going on with your thinning program. And if you largely grow solid blocks of a few varieties, by all means go whole-hog and fully follow the procedure outlined here. It will work. Unfortunately, if you have many discrete blocks (tree age, variety, site, etc.) it's just too onerous/time consuming to implement the procedure in all blocks? (But do it in high value blocks, don't waste your time with McIntosh...) What's really needed is a bullet-proof way to measure and enter data quickly (and accurately) w/o having to employ too much man/woman power? Ideally in a mobile package, that also gives immediate feedback? Perhaps a chemical thinner spray has to be made sooner than later (because of weather conditions?) and having that immediate feedback would be useful (vs. having to go to home/office and entering the data into XLS spreadsheet)? Can we do that? I understand Cornell folks are working on an app that might help, keep your eye out for it in 2018. I just hope it is simple enough to be truly useful. I have some say, I am a beta-tester for Jaume and Poli at Cornell...

Alas, chemical thinning decisions are never "simple," are they? Good luck in 2018... 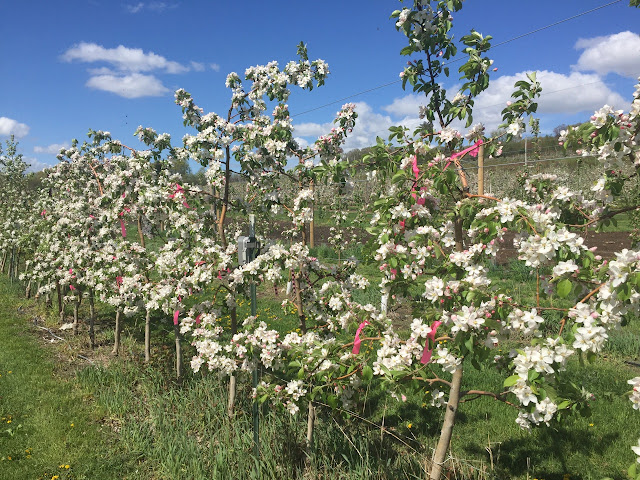 Posted by Jon Clements at 11:34 AM No comments: