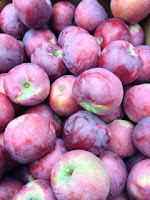 Right. I am no poet! But I have recently come to re-appreciate some of the attributes of Liberty. A reminder it is scab-resistant (but not wholly disease-resistant). The local-favorite apple Macoun is one of it's parents. It is an extremely consistent cropper, often to the detriment of fruit size, but that can be managed. Picked fully red and ripe, but before it has started to go south (which happens fast), it has a flavor reminiscent of the best apple cider you ever had. It is crisp (for awhile), the flesh is clean white and mostly tart but with some sweetness. Here are the stats on some Liberty I recently picked at the UMass Cold Spring Orchard in Belchertown, MA:

Now, Liberty has been around for awhile so why hasn't it exactly caught on? Especially given it's scab-resistance, hence reducing (but not eliminating!) the need for fungicide sprays. (Plum curculio love it, it needs an aggressive insecticide program.) For one, it does not last long when picked, and if left too long on the tree, it gets slightly greasy and develops an off-favor IMHO. Hence, it does not have any storage legs. BUT, a colleague of mine at Rutgers insists these negative traits can be offset with the judicious use of ReTain. (As much as I hate it when he is right, I suspect he is onto something here.) So I am not sure we have given it enough attention as to how to manage it for best and sustainable fruit quality.

After I picked the above Liberty apples, I was so full of myself about Liberty I decided to do a rather unscientific but nonetheless (I think) worthwhile taste test of Liberty with our retail customers at the UMass Orchard. A box each of Liberty and Macoun were placed on a table in the retail sales area. Customers were simply asked "which apple do you like better, x or y" after giving them the opportunity to sample each fruit. 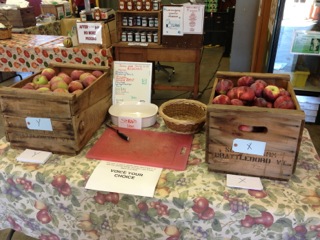 Well, the results were a little disappointing to me (although I will have to admit, the Macoun tasted pretty good): 1.5 to 1 in favor of Macoun (i.e., Macoun was preferred 1.5 times over Liberty). BUT, alas, the Macoun were treated with ReTain! (Liberty were not.) I guess that is not really a fair comparison???
Posted by Jon Clements at 10:33 AM No comments: