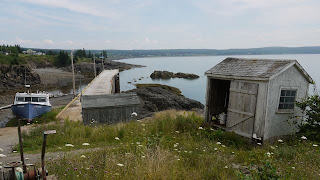 Bienvenue from Wolfville, Nova Scotia (NS). Sunday evening IFTA 'meet and greet' after a day of touring around Bay of Fundy, including Cape Split and Hall's Harbor.

1.) Extension cut, about 7-8 years ago. But, government funding for 'AgraPoint,' grower has to pay for scouting. Bill is a horticulturist for them, also involved now with NS wine industry.

2.) Annapolis Valley, Digby to Windsor, most of the apples in Kings County. Water (Bay of Fundy and Atlantic Ocean) is somewhat of a moderating factor. Extreme minimum temp. -24 F. Annual precipitation total 46 inches, of which over 100 inches is snow. Frost-free period 138 days. Soils are variable, clay, loam, sand.

5.) Typically, transition from standard to semi-dwarf to dwarf (M9, B9) rootstocks. 800 trees on high side of hi-density.

6.) 10 +/- fungicide applications for apple scab the norm. Seem to be having more mildew. Ugh, never had fire blight until late 90's. Now, every year one or two infections, including 2009. New cultivar selections likely a factor.

1.) Works with Charlie Embree, research scientist; new charge to collect apple varieties from around the world, formerly helped with breeding.

JC
Posted by Jon Clements at 6:14 PM No comments: