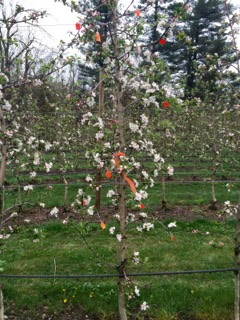 Well here we are, post petal-fall/fruit set/approaching 3/4 inch diameter apples, and indeed there has been lots of cold damage to tree fruit here in Massachusetts. No peaches (Happy Valentine's Day) and apples were looking pretty bad (early April freeze) until we finally got out of bloom and saw some fruit setting and sizing. It's not all pretty though, apple orchards in eastern MA generally have fared better than those in the Connecticut/Pioneer Valley. Fruit set has depended a lot on variety (Macoun looks good, McIntosh intermediate, Cortland not so good, Honeycrisp, well, it depends) and site (obviously). Return bloom was probably not going to be great either given the heavy apple crop last year. When all is said and done, I predict some orchards will have less than 25% of an average crop, some will have greater than 75%, some will be in the middle at 50%. There will be apples, the price will be good, so it will be a good year to have apples (if you have them). Sometimes years with short crops turn out to be more profitable for some. The cup is half full at least.

So, despite my usual reluctance to measure fruit as they grow per the Precision chemical Thinning Protocol/predicting fruit set (PTP), and with a little prompting from Poliana Francescatto at Cornell, I went whole hog and set up 7 demonstrations across 3 different orchards (TFF, CSO, and SHO) and 3 different varieties (McIntosh, Gala, and Honeycrisp). But, I cheated a bit, by reducing the number of flower/fruit spurs used to 10 per tree (vs. 15 per the PTP) in 2 orchards (TFF and CSO), and just 5 spurs per tree in one orchard (SHO). All my results are published here.

Some comments on the process and results:

I will try to update once final set is counted... 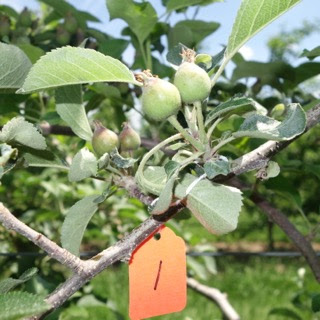