And the early Fuji winner is... 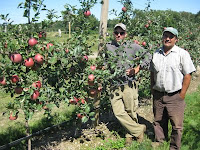 I was kind of surprised during a visit to eastern Massachusetts (Northboro specifically), and upon prompting by Mo and Andy Tougas of Tougas Family Farm, to look at their Daybreak and Early Auvil Fuji's for maturity. Indeed, they were quite ripe -- see my 09/11/08 apple harvest report -- for details. Daybreak seems a little ahead of Auvil, otherwise, they were similar, although Daybreak seems to be a bit more intense in red color. I would not normally expect these to be ripe until more towards the middle of the month, but clearly harvest could start any day now. Daybreak was particularly impressive in terms of classic Fuji flavor and sweetness for this early harvest date. These were also very large fruit on 2nd-leaf tall spindle apple trees, with a crop load of 10-15 apples per tree easy.

I also returned to the UMass Orchard in Belchertown and looked at September Wonder (formerly Jubilee) and Rising Sun Fuji. Not nearly as impressive, I have never cared for September Wonder that much, and the Rising Sun were way over-cropped, so not really a fair comparison.

Still, in my mind the clear winner is Daybreak, followed closely by Auvil Early. Run, don't walk, to get some of these very high quality, large-fruited, and what are going to be very profitable early Fuji's in the ground. Daybreak is exclusive to Adams County Nursery, and Auvil Early is available from Van Well Nursery.
Posted by Jon Clements at 7:17 PM 1 comment: