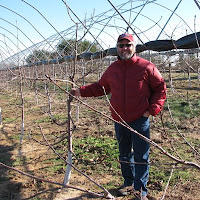 To start the New Year I traveled to New Jersey, Maryland, and Pennsylvania with Mo and Andre Tougas of Tougas Family Farm to specifically look at Haygrove Tunnel technology for producing dwarf sweet cherries. The Tougas's are contemplating adopting high-tunnel sweet cherry culture and thought an up-close and personal look at some existing high-tunnel sweet cherry orchards would be worthwhile. They were right, and I learned a lot about the 'highs' and lows of cherry production under high-tunnels on the humid Eastern seaboard.

In New Jersey, we met up with Win Cowgill, Hunterdon County Extension Ag Agent and Rutgers North Jersey fruit specialist to first visit Melick's Town Farm in Oldwick, NJ. There, John Melick gave us a quick run-down on Haygrove hi-Tunnels they are using for tomatoes, cut flowers, and raspberries. These tunnels have 4-foot sides only and are not suited for cherries, but John talked about the season-extending and disease-prevention benefits, as well as allowing workers to be productive when it is raining outside. Video.

Next we went to Terhune Orchard in Princeton. Owner Gary Mount showed us an existing cherry planting of about one acre that he covered with Haygrove Tunnels after enduring a nearly total crop loss to fruit cracking one year. Gary says that he can't afford to lose a hi-value crop such as cherries that he sells for $5 per pound pick-your-own. He says the tunnels are insurance against frost and cracking, despite their high cost ($35,000 per acre give or take). But his optimism was a bit tempered by a significantly reduced crop in 2008, a result he thinks, of poor pollination. Despite using purchased bumblebees, it is a problem that is not acceptable until it is fully resolved. Video. Others have expressed similar concern over pollination of sweet cherries in tunnels. For a little more on Gary's thoughts, read a short article he wrote -- 'Haygrove High Tunnels - Control of Nature?' -- for Terhune Orchards newsletter.

Next, on to Elkton, Maryland to visit with Molly Brumbley of Walnut Springs (Strawberry) Farm. Molly has been a serious study of dwarf sweet cherry production and it showed. A newbie to tree fruit growing, she has pursued sweet cherry production under tunnels with no preconceived notions but with a lot of research, travel, and consultation with the experts. Her two acres of 28 ft. wide Haygrove Tunnels were nicely done -- three rows of three- or four-year-old cherries planted in a bed, with one travel row. She has planted mostly Black York and Cavalier, all on Gisela 5 rootstock, and has been very pleased with the early production to date on Black York although the Cavalier have been a little shy-bearing. She is shooting for just a two-week open-to-close pick-your-own cherry season, and the response so far to her cherries -- which sold for $2.95 per lb. in 2008 -- has been very good. Molly is using 'smart ends' to help stabilize the Tunnels on a very windy and exposed location. Her research has paid off and it was very evident with the attention to detail she has put into her tunnel-covered sweet cherry production system. For more information see a recent article on Molly and her cherries in the Fruit Growers News titled 'High-Value Crops Perfect for High-Value Land.' And, watch this short video where Molly discusses erecting the Tunnels after planting the cherry trees, and the benefits of a 28 ft. wide Tunnel vs. 24 ft.

A visit to Elkton mean't we also had to see American Fruit Grower's Apple Grower of the Year Even Milburn and his son Nate of Milburn Orchards. Milburn has grown cherries -- nearly 2o acres at last count -- successfully for many years in the 'open,' although Nate admits not every year is a winner because of frost and fruit cracking. Still, they attract large crowds of u-pick customers seeking sweet cherries every year and are planning to phase out an older cherry orchard in a cold site and distant from the 'home farm' and plant to a more favorably location close by. Milburns represent a classic Eastern sweet cherry orchard (if there is one?), and despite the challenges presented by frost and cracking, seem to be quite successful in their cherry production practices.

Finally we stopped at Weaver's Orchard in Morgantown, PA. Although owner Ed Weaver was not available, there was plenty to look at on our own, including: young and mature cherry plantings covered with Haygrove Tunnels; effective use of Promalin 'paint' with notching to promote branching; and perpendicular-V peaches. A phone conversation with Weaver indicates he has mixed feelings about the covered cherries, hence the hesitation on covering another young cherry planting. (He may have had enough?)

Weaver's is clearly a large, diversified orchard with a lot going on. Hence, my summary thoughts on cherry production under hi-Tunnels: