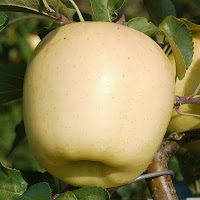 General comments on 09/04/09 apple maturity: Shelburne and Deerfield in upper Connecticut River valley. Gala and Honeycrisp need more time, at least another week, in Shelburne. Marshall McIntosh being harvested in Deerfield, Honeycrisp could be spot picked on color now. In Belchertown, Silken (pictured at left) is a very nice, yellow apple which is approaching harvest. Lindamac McIntosh will be picked Monday, and they have great color. Full report here.
Posted by Jon Clements at 10:20 AM No comments:

General comments on 09/03/09 apple maturity: Lindamac, Gale Gala, Buckeye Gala, Honecyrisp (Northboro, MA). Lindamac, Gale Gala, Honeycrisp (Stow, MA). My first look at Gale Gala. With the exception of Northboro Honeycrisp, all fruit from 2nd leaf trees. With the exception of Northboro Honeycrisp, all fruit needs a week to develop better sugar, maturity, and flavor. Starch index of the Northboro Honeycrisp was unusually high, meaning the fruit were very mature, or there was not much starch, and hence sugar, to start -- harvest of these Honeycrisp should commence as soon as color is adequate. Full report here. Also see 09/02/09 apple maturity report.
Posted by Jon Clements at 9:41 PM No comments:

Show me the money...

A colleague of mine in NJ just reported that he picked one (20 bushel) bin of Lindamac apples off 100 trees planted last year to a tall-spindle training system that I had sourced from Willow Drive Nursery. These were knip-boom trees, so they were decent, but the branching was a little variable and they may have been 2'nds, so I can't say they were truly great. Nice, but not great, probably equivalent to a decently feathered 1-year nursery tree. Now, some head-only math:
Not bad. After the 3rd leaf, assuming everything goes well, it should be all gravy for retail apple growers planting to tall-spindle. Anyone care to refute my logic???

JC
Posted by Jon Clements at 8:05 PM No comments: 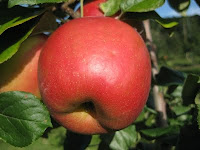 General comments on 083109 apple maturity: I was a little taken aback by the maturity of some of the Honeycrisp -- 6 out of 9 apples were 7's on the starch iodine index, and indeed ate very well. The other 3 were 2 to 3 on the scale. (Not ripe.) These Honeycrisp were from dwarf trees and had decent red color. Certainly a first pick is warranted this week, but beware, Honeycrisp is the apple that loves to taunt, and some are going to be ready, and some less than desirable. Good red color and a loss of the green background as well as flavor should be your guide to picking. Orchard-to-orchard and block-to-block variation is the norm with Honeycrisp. One fruit exhibited significant core browing/breakdown. The Lindamac can be picked later this week and sugar (soluble solids) was good. It's not too late to put ReTain on Macs right now, and this will hold them on the tree well into late September. (7 day pre-harvest interval.) Silken could be better, so I would wait until at least late this week if not next week to pick them. This is a beatiful, yellow apple for this season and eats very well. Full report here.
Posted by Jon Clements at 7:57 PM No comments: