After a lunch with a view (why didn't I take any pictures?) at Verger Bel Horizon (and some more cider!), Friday afternoon first stop was to study the "bagpipe" sprayer at Fruiteraie des Gadbois in Rougemont. This air-assist sprayer sprays three rows at a time and was the subject of much consternation, but on flat land it looks like it works. At Gadbois we also saw dwarf apple trees of Sunrise/Ottawa 8, and in their packing house, an ice-based hydro-cooler and air-locked (for dubiously easier access?) CA rooms. Of note is the fact most all their fruit is marketed at a large, year-around public market in Drummondville.
At Verger Pomme Atout, also in Rougemont, Louis-Raphael showed us their extensive line of equipment, including the Darwin string thinner pictured below. They have been using it to thin apple trees at about 10% bloom, and so far, no problem with fireblight, although they apply streptomycin when conditions dictate. A "fruiting wall" orchard of McIntosh and Empire planted about 25 years ago was also visited, where workers were using a platform to summer prune.
Last orchard of the day and tour was Vergers Paul Jodoin, Inc. of Saint-Jean-Baptiste de Rouville. Now run by three brothers, the nearly 600 acre orchard includes their own CA storage, computer-controlled packing line, and processing plant for juice and other products. Pictured below is brother Francois, showing us a five acre, 2007 planting of Cortland, Spartan, Empire, McIntosh, and Honeycrisp on O.3, B.9., and M.26 rootstocks. This somewhat sandy, droughty orchard in Rougemont lacked vigor, perhaps also an indication of the short growing season and cold winters Quebec growers face?
At the end of the day, back at Vergers Denis Charbonneau (where we started the day with breakfast), we had a classic Sugar Shack Meal of ham, maple sausage, baked omelette, baked beans, apple pork pie, boiled potatoes, meayball stew, cole slaw, pickles, pea soup, and various maple desserts. Although delicious, I have to warn you -- drinking a few beers before the meal does NOT go "tré bien" with the above entré! Nevertheless, a good time was had by all I am sure...

Posted by Jon Clements at 2:56 PM No comments: 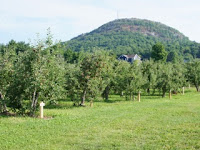 July 27, 2012 - day 2 of the IFTA 2012 Quebec Study Tour began in the Vergers (Orchard) Denis Charbonneau in Mont-Saint-Gregoire, well, with breakfast in their crepe restaurant! (Choice of fruit crepes or a farmers breakfast -- eggs and meat.) Vergers DC is a large (125 acres) orchard-sugarbush-pumpkin patch that sells mostly direct market with close to 200,000 visitors per year. They do pick-your-own off 50,000 apple trees and have a variety of agri-toursim activities including a mini-farm, playground, and haunted house. They also have a Cidrerie, and despite the early hour, we had to sample some of their fine hard cider. Above left is a picture of the orchard and Mont-Saint Gregoire.

Moving on to two orchards with one stop in Saint-Paul-d'Abbotsford, we visited Thomson Orchards and Verger R.C. Guertin. First, at Guertin we looked at young plantings of Gala with fertigation producing high early yields. With 50 acres of these new plantings, Guertin orchard has invested in a mechanical harvester to improve profitability. I should also mention Verger Guertin includes a growing winery, Les Artisans du Terroir, for which they grow their own grapes.


At Thomson Orchards, the discussion focused on Dwarf vs. Semi-Dwarf? Dean Thomson believes with new chemical tools such as Apogee, ReTain, and SmartFresh, medium-density plantings of traditional varieties such as Cortland are a better bet. And they are highly productive -- for 2012, Thomson Orchards expects to produce close to 300,000 bushels of apples off 380 acres or orchard in nine different sites. Owner Dean Thomson is also the mayor of nearby Saint-Paul-d'Abbotsford, and says modernization of communication by cell phone is the only way he can handle the logistics of it all!


Posted by Jon Clements at 7:41 AM No comments: