Raynox Plus® applications to prevent sunburn of Honeycrisp apples

Raynox Plus® Sunburn Protectant "protects fruit from sun damage by forming a thin, clear, natural wax layer that blocks damaging UV rays from harming fruit" according to a Valent Biosciences Fact Sheet. In 2015, Raynox Plus was used in a demonstration at the UMass Cold Spring Orchard in Belchertown, MA.

Applications of Raynox Plus were made on an app. 10 year old block of Honeycrisp apples, 0.85 acre in total size. Five individual rows were divided into four treatment sections, two were an UnTreated Control (UTC, no Raynox Plus) and two were Raynox Plus treated (RNX). Thus, half the block was treated with Raynox Plus (RNX), half was left as an UnTreated Control (UTC), however, treatments were randomized throughout the block and rows were sprayed such that there was no drift of the RNX treatment into the UTC treatment. The Tree Row Volume (TRV) of this block was app. 175 gallons per acre, and treatments were applied in 62.5 gallons of water per acre (app. 3X). Rayox was applied at a rates of 2 to 2.5 gallons per acre, in a total of five application timings (all in the morning):

Environmental data (temperature and solar radiation) along with dates of Raynox application(s) are presented in Figs. 1 and 2.

Direct observations of both treatments (UTC and RNX) beginning after the first RNX treatment date of July 6 were consistently made and no observable sunburn/heat injury was found within both treatments until well after the last treatment and roughly coinciding with harvest in early-mid September. Note that the highest temperature of the season (app. 95 F.) was recorded on 8-September (Fig. 1), however, by then solar radiation was reduced (Fig. 2). Although some minor sunburn symptoms were observed in September just before or at harvest, it was only on  a minimal number of fruit, and there was no observable or discernible differences between treatments. It was concluded that sunburn did not present any kind of significant fruit quality problem throughout the block at harvest, regardless of Raynox treatment or not. The harvest crew did not note any significant sunburn/heat injury issues throughout the block, although clearly there were some symptoms as noted later in this blog. 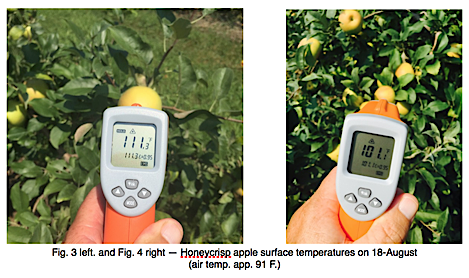 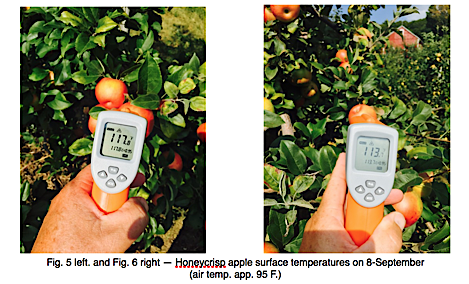 It was observed on September 3, and after several Raynox applications, that foliage/leaves on the Raynox treated trees took on a significantly different (silvery) appearance (Fig. 7).

Some examples of the minor number of fruit with sunburn/heat injury symptoms can be seen in Figs. 8 and 9, however, damage was minimal and there were no treatment differences observed. It’s felt most of this (minor amount) of injury occurred during the September heat period(s), and personal communication with Washington apple growers suggests that fruit becomes more susceptible to heat/sunburn injury with increasing fruit maturity near harvest. Although they were not applied at this time just before harvest, RNX applications may have the most benefit then.

Posted by Jon Clements at 12:51 PM No comments: